Deanna and Nastassia somehow got lost going to the supermarket, and the day was already starting to be a hot one, while Jan took care of the map for the day. We somehow left the apartment a full hour later than we planned, but all was good in good company.

Deciding to go over a bridge that we hadn’t crossed yet, Nastassia kept an eye out for cops while Jan and Deanna tested their spidey-skills and climbed on up. We took a little hike up to the Liberty Statue, which is the only statue left in the city dating from the communist occupation. After the collapse of the Soviet Union, the city covered the statue in a white sheet for 3 days, and the exact same statue was then unveiled as a new one. Pretty views, fresh air, good breeze, the climb was a fairly easy one –  apart from sweating like mad because of the extreme heat.

We took a quick 20 minute breather at the top of the climb to enjoy the views, take some pictures and get in some quick sketching before returning from the open skies and fresh air back down to the city to enjoy a quick cool lunch at our flat. 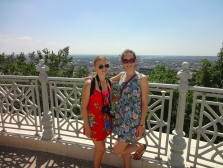 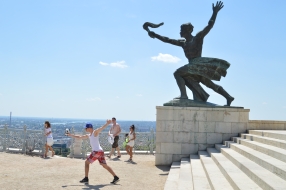 Coming down the other side of a hill there’s a small cascading water fall that’s a pleasant surprise, and provides a refreshing mist in the hot July heat. Definitely worth locating and checking out if you ever find yourself wandering through Budapest. 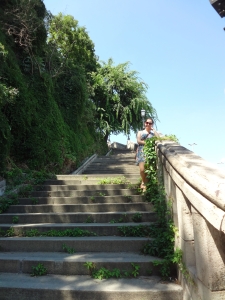 After our lunch, we decided to check out the Széchenyi Thermal Baths that everyone praises. To be honest, we thought a 40 degree pool might be too hot on such a sunny day, and yet the baths are amazingly refreshing and really help to cool you down. We had a lot of fun with Jan’s waterproof camera, and spent quite a bit of time in the water. Lather up the sunscreen, kiddies! 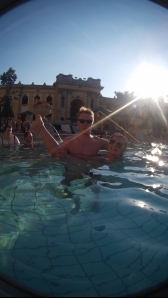 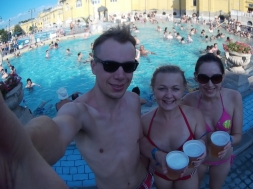 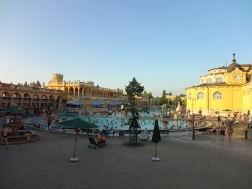 The baths close around 7, and by the time we made it back to our apartment, it was getting a little later. Deciding to call it an early night because of light sunburns and a full day in the sun, we cooked ourselves some rice and cutlets. Rest, relaxation and a little bit of lotion to cure the sunburns is on the agenda for tonight. Jó étvágyat! 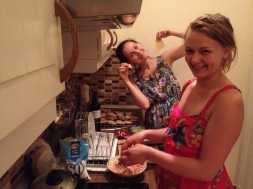 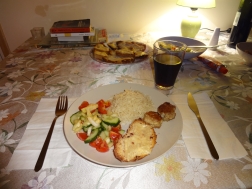